As I have mentioned before a few times, we have had to make some adjustments to Liv’s warderobe since she has started using her potty. One of those adjustments involved also her pyjamas. I don’t know about others, but I find any onesie pyjamas, whether they are with snaps at the crotch or a long zipper in front or any other closure just impractical. Even more so in the night. Since I have to get up, half drowsy, and go to the potty with her and undress her. It just takes too much time and effort, when half-asleep. Not to mention putting it back on. 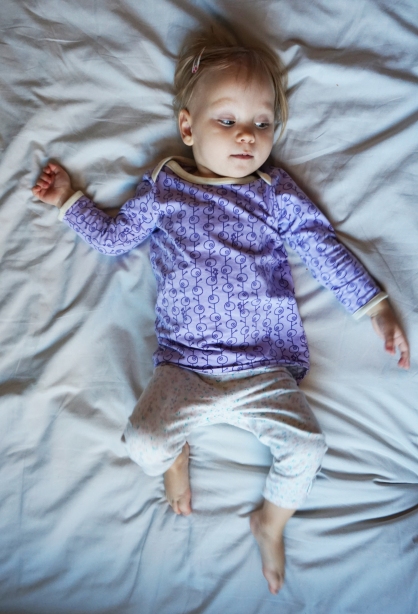 So we definitely had to change to trousers-and-shirt-pyjamas. My problem with those is, that Liv hardly ever stays under her blanket during the night. And those shirts are up ALL the time. Leaving her with a bare belly. And back. Soooo… A new shirt we needed.

I made it longer in the front, but especially with a much lowered hem in the back. I actually didn’t mean to make it THAT much longer in the back. While making it, I just thought suddenly thought I’d try to make it as long as possible. I could always redo it, cut it shorter. But then it just seemed like a good thing. And so it stayed.

It kind of reminds me of a tail-coat. But that never occured to me until I saw it finished on her, since I didn’t mean to do it that long. 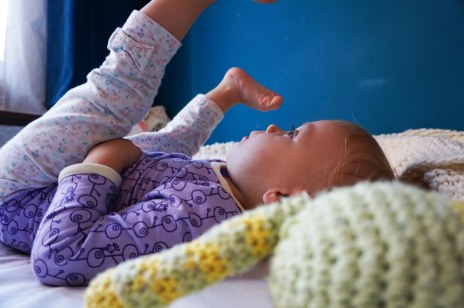 I don’t know. It just works. I mean, of course, even like this it gets up and her belly is bare sometimes. But it is definitely less than with normal pyjama shirts. Though, I might have made just a nightgown. And I probably will. But this is such a good in-between alternative.. 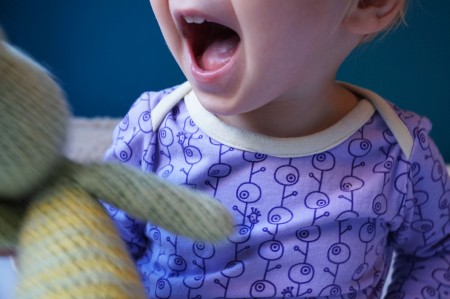 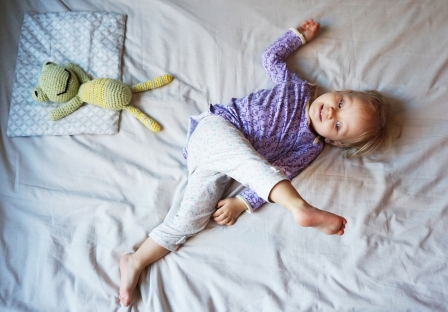 The fabric is a jersey by Rebekah Ginda, Joy Flowers in a row in violet. The neckline and sleeve hems are a light yellow jersey I had at home lying around. The pattern was inspired by a onesie pattern from Burda Style. That is, at least, the upper part. 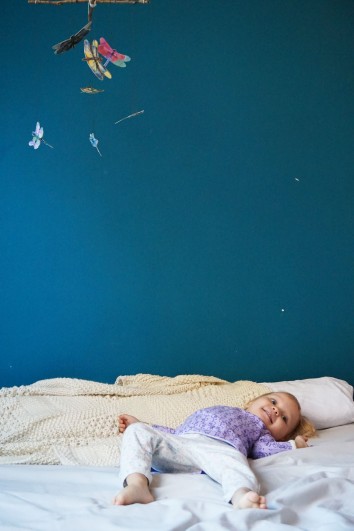 (See, that Dragonfly mobile I did for her when she was little is still hanging above our bed :-)

I almost thought I missed an opportunity to make photos of this dress in the middle of fallen autumn leaves, as I imagined. Inbetween 5 weeks of never-ending colds, coughs, slightly too cold weather, to be topped off with a strep throat (Yay!), there was little chance to take Liv outside just in a dress. 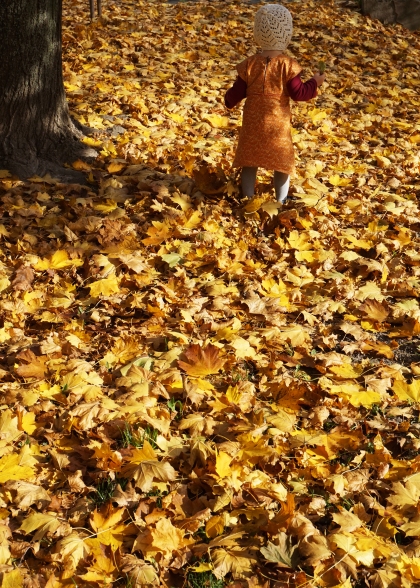 But. Luck has smiled upon me (us) just for a moment last week. In the middle of November, it got really nice and warm (17C!), Liv just seemed to have overcome the colds finally (just a day or two before she suddenly got high fevers and that strep throat), so I was not feeling guilty (then) to let her run around a little bit without a sweater or coat on in the sun. Even I had only a shirt on, and the sleeves rolled up, because I was feeling warm. Not to mention, Liv had a shirt or two underneath that dress. 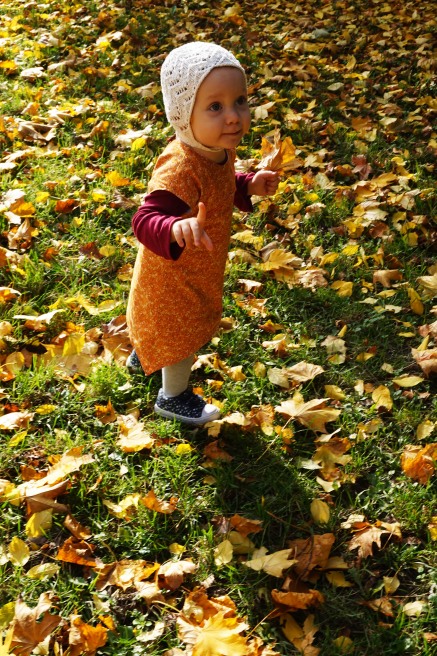 This is definitely one of our favourite autumn dresses. One day, in the beginning of autumn, I was looking into my fabric-stash-closet, to look what I should do next, when Liv took out this wonderful yellow leafy cotton fabric and handed it to me. Well, it’s actually flowers, but every time I look at it I just think of autumn foliage. I asked her if I should make something out of it for her. She said “Yes”. I asked her if she wanted a dress or trousers out of it. She said (something that did sound similar to) “dress”. So there it was. She chose herself. And I obeyed (the obedient mummy I am). :-) 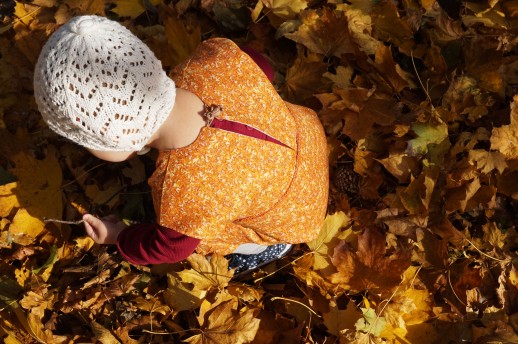 The fabric is a patchwork cotton I bought some time ago. I was looking for something entirely different at that time (fabric for that little Rhino, actually), when I went by those pretty little bundles of rest-fabric the store was selling at discounts. This is one of the fabrics I took. It was just enough for that dress for Liv. :-)

As for the pattern, I really liked the top part of this Penny Playsuit by Shwin&Shwin, I saw some long time ago. So, inspired by it, I used their pattern of the top bodice and added my version to make a dress out of it.

Since I was doing it out of the same fabric, I added the ribbon between the skirt and the bodice, to accentuate the curve of the bodice. Also, I made the hem of the skirt to immitate the curve and make the emphasize it even more. 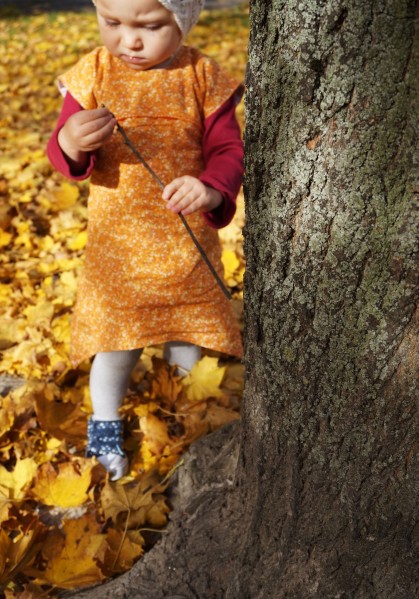 I only sometimes kind of wish I had made a zipper in the back. It is a bit tight when un/dressing. But we manage anyway. I don’t know why I really wanted to make just a button instead with an elastic loop. But what a button :-) It’s like a bear having a stroll in the middle of autumn leaves 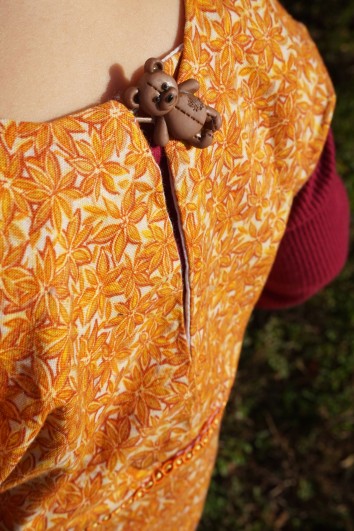 I love how she looks almost like a little autumn-elf in the middle of all those fallen leaves, blending in and almost disappearing :-) 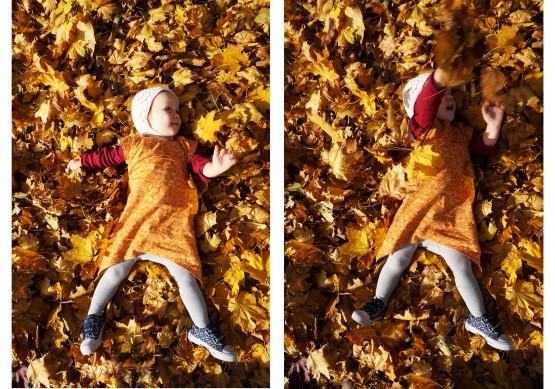 But the asymmetric style of it makes it a nice street-style dress too :-) 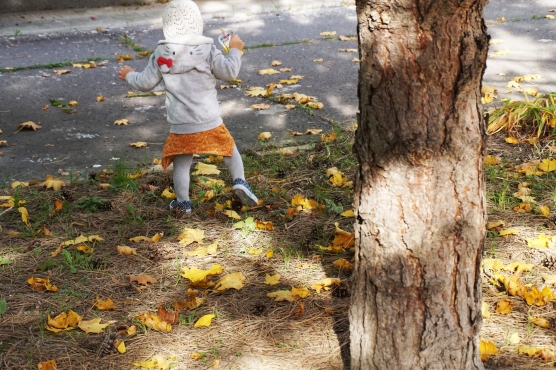 Autumn is in its fullest and I’ve been waiting to share some new things. 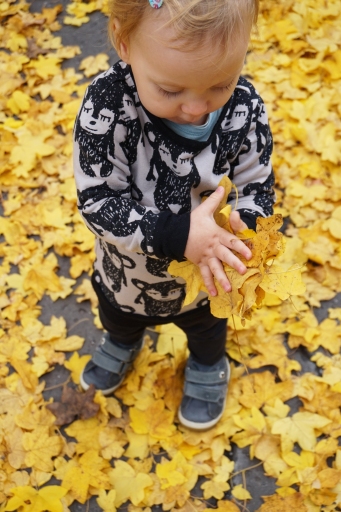 As I mentioned before, my now 19-month-old daughter got the hang of being without diapers pretty quickly and is fully potty-trained for some months now already. This brought some new challenges into our lifes, though, some of them concerning her dressing. For example trousers usually being all too big around the waist. Or not wearing onesies anymore, to make it easier get her undressed when she needs to go potty. And since it got chilly outside, we started wearing long shirts, sweaters, or dresses on top of shirts to protect her back that might pop out, as is usual with active toddlers.

So one of the first things I made was this long sweater, great for late summer (once the evenings start getting chilly) and early autumn (still enough warm to be needing ‘just’ a light sweater).

The fabric I used is a Little Hippu grey Bio-Sweat. Though, I don’t know why it is called grey, it is much more of a brownish colour. Just btw. I chose it because I actually liked the brownish colour and found out about the name later. Not that it matters. I added some black jersey (which I had at home for centuries) for the cuffs, neckline and the bottom of the sweater.

I actually wanted to add originally some black shoulder patches as I did on the Orange Animal Shirt to make it more edgy.. but it would have gone straight over the hippu’s (whatever that is, many have guessed all kinds of animals :-) heads… making them… all… headlless… so I changed my mind in the end and left it as it is. I made the pattern really just by taking one of her shirts that I liked the fit of, tracing it and making it longer, to the length I needed. Easy peasy. That was a fun and fast little thing to do.

I know I’ve already said the previous post was to be the last about summer-made stuff. Yet, there is just one more thing I wish to add. I promise. But the pictures have been taken rather recently, so it might work like a bridge between those two seasons. :-)

Because my brother and his bride had a yellow-white theme on their wedding, we all wanted to go with it. At least a little bit. As would our little ones. So I made little accesories for my daughter and her cousin.

My little nephew got this little chevron bow tie. Well, it was really just the bow, being attached to his onesie with two snap fasteners, to make life (both for him and his mama) easier. 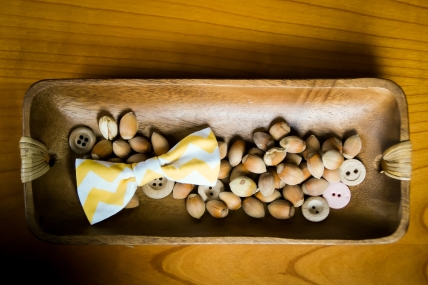 He looked just sooo sweet with it. My sister bought him those yellow-with-white-dots suspenders (at H&M if I remember correctly).

My own little girl got a sweet little vintage-inspired bonnet out of yellow cotton, lined with the same yellow-white chevron fabric inside as her cousin’s bow tie.

We used the bonnet for the whole summer as a hat. The big shade working really well in keeping the sun from shining into her eyes (which she hates). Funny thing, though, she never wore it at the wedding. Liv absolutely protested every time I tried to put it on her there, so I gave up rather quickly. Some wars are not worth fighting.

The bonnet is two-sided, really. You can put it on either side up. But we never did, I liked the chevron side just to peak out from the inside.

Ha, ha.. you can even flap the shade over. Sometimes we did, so Liv could see better.

Hi, I'm Zuzana. I'm a mother at home with my wonderful daughter, who inspires me from day to day to create various things and be the best mother and person I can for her..